Night of the Radishes

Unique…Outrageous…Fascinating…What word exists that can describe the carvings and sculptures on display during La Noche de Rábanos, or the Night of Radishes? This event is held in the zócalo of Oaxaca every December 23. Display booths ring the zócalo, and a raised walkway is constructed to provide easy viewing by the thousands of people who marvel at the figures and entire scenes created with giant radishes.

Spanish colonists brought radishes to Mexico in the late 1500’s, and the monks encouraged the local people to grow them. According to historical record, a monk suggested that the farmers carve the radishes into imaginative shapes to decorate their market stalls as a way to attract attention to the new vegetable and increase sales. His idea was apparently successful because three centuries later in 1897, Oaxaca mayor Francisco Vasconcelos Flores organized the first Noche de Rábanos in the zócalo. The celebration has been held every year since.

These are not your everyday supermarket radishes. They are an elongated variety that can grow up to 2 feet long and weigh 10 pounds! But don’t put them in your salad, as they are heavily fertilized and treated with chemicals! Most of the radishes are cultivated in an outlying area of the city, but I was told that some farmers raise their own.

The artist’s imagination is the only limitation, as there is no general theme. Scenes can depict religious celebrations, markets, carnivals, and family life, or figures can be purely exotic creatures.

We walked to the zócalo early (8:30 a.m.) so that we could watch people finishing the carvings and assembling their displays. This was a good time to take pictures because there were no crowds. By noon hundreds of people were strolling on the walkway, admiring and photographing the delightful carvings. By evening there were thousands. The orderly line moved slowly along the raised walkway, and everyone had a good view of the displays, but I am so glad we went early.

As it seems with all Mexican festivals, the level of activity is almost overwhelming, and everyone has a great time.

Let the Radish Be Your Guide 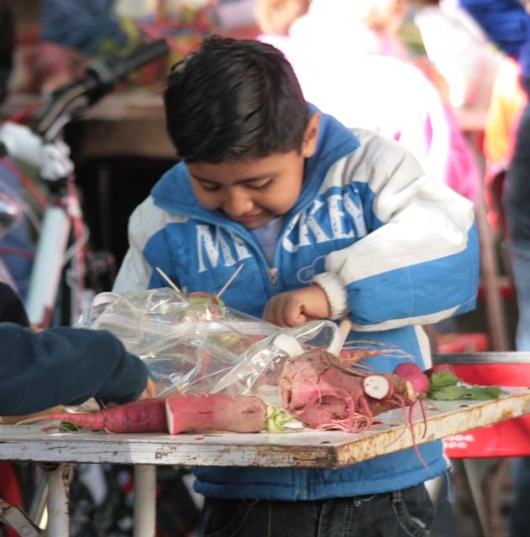 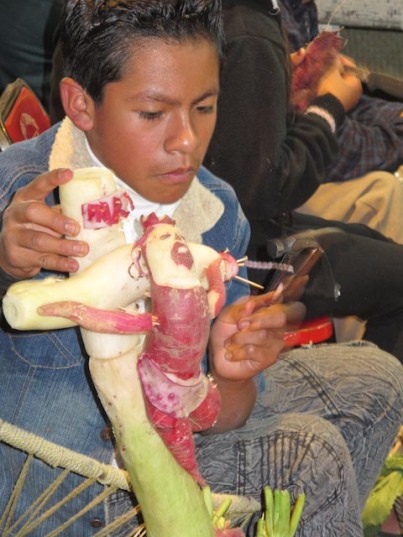 Photos of the dried flowers and corn husk displays will be in another post.

I hope you enjoyed these fascinating carvings and the people who created them!

2 thoughts on “Night of the Radishes”