Archive for the category “Food”

El Carrizal, located high in the Sierras about 2 1/2 hours from the city of Oaxaca, is one of our favorite hiking/weekend excursion destinations. Some of the local delights from the trip last year can be viewed here.

View of the village of El Carrizal from a trail side mirador (lookout).

A highlight of this visit was learning about three bakeries that produce flat, round and quite tasty loaves, which we savored at every meal! The bread is totally local – growing the trigo (wheat), separating the grain, grinding into flour, mixing, and finally baking.
Click on any photo for a slide show.

The bakery below is owned by two families who bake bread twice a week.

Our guide said the bright green fields are the trigo

Baskets for transporting bread to markets around Oaxaca

Cooling and waiting to be bagged

Fuel for the oven and the finished product

This mixer was the only piece of machinery.

The kneading of bread was in this enormous trough made from one tree, smoothed with years of work.

Photo and caption by Lorna Stone. Thanks, Lorna!

Corn is another product totally grown and processed locally. Kernals are dried, ground, and made into delicious tortillas, and the husks and stalks are fed to animals. Maybe the husks are even used for tamales! As we were walking along the dirt road toward the mirador, these people waved us over to chat. The corn is typically put on the flat rooftops to dry then removed from the cobs and stored for grinding into the meal or flour for tortillas. 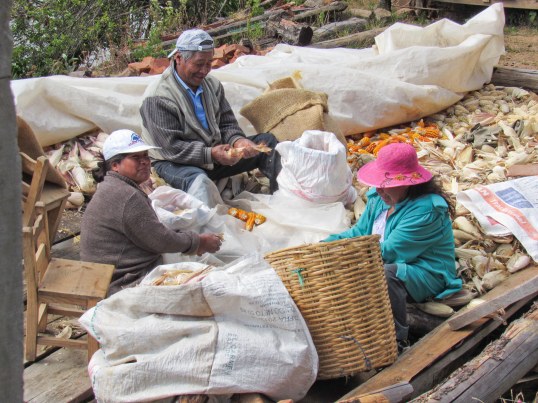 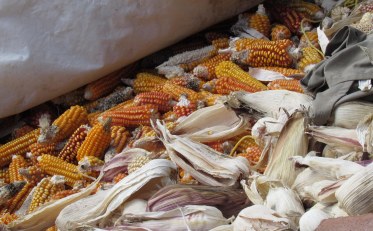 The people of El Carrizal are exceptionally friendly and welcoming. Everyone agreed that these people are what made such a magical weekend! We’ll definitely be back next year.

The angle of the rising sun creates brilliant colors as village life unfolds below our cabañas. El Carrizal is the most pastoral and serene of any mountain village that we have explored so far. The town spreads out in a bowl – it WAS the view, in contrast to other villages that offer views of the vast valleys of Oaxaca.

click on any photo for a slide show and full captions

Café de Olla, coffee that has a hint of cinnamon and sugar, is brewing in this built-in pot. The coffee is served in bowls. 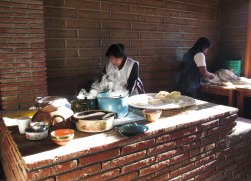 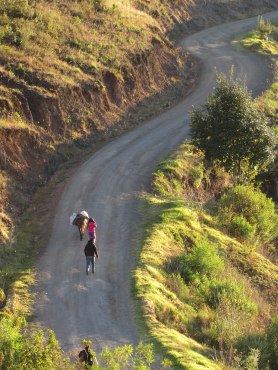 As morning light strikes the mountainside, villagers with their loaded burros are already trekking up the hill to an unknown destination.

Fueled by a delicious and hearty meal, hikers and birders are ready to hit the trail. 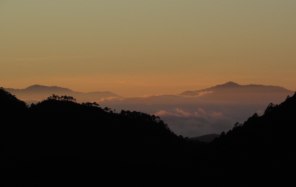 Sunrise over the Sierras Delighted by the lovely, peaceful village, hikers began the descent to the valley far below

Maracuya, a fruit for making cold drinks and nieve (a kind of ice cream)

Corn drying on the roof

Cascadas spill over rocky ledges and force their way around boulders, forming streams that meander on down through the valleys, undoubtedly gathering into more cascadas along the way!

A short rest in the shade…

and then up to a mirador (lookout) at the top! 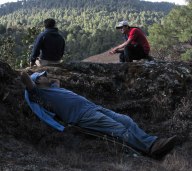 Everyone wondered what was growing in this impossibly green field! 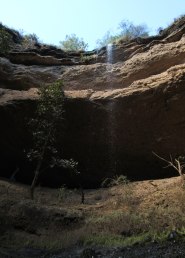 A huge variety of plants grow in the Sierras – from this enormous maguey to a tiny cactus. Photographer Impett estimated the quiote (flower stalk) to be 40 feet tall!

Don’t tread on me! 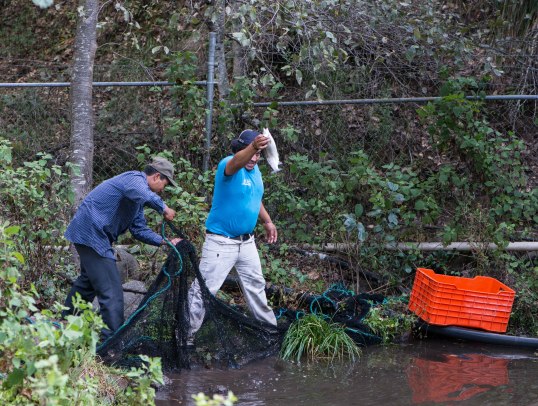 Taking advantage of the cold mountain streams, people in many villages have built small trucha (trout) farms and restaurants. This man is catching our dinner – talk about fresh!   Photo by Rick Impett.

Satisfied customer – this is a medium?

Breeding ponds for the trucha. Photo by Rick Impett

Whether hiking, biking, or relaxing with a good book, the friendly people and beautiful vistas of El Carrizal make it a wonderful place to visit!

BUT BEWARE – YOU NEVER KNOW WHO IS WATCHING… In Mexico the boldness of orange brightens every part of life – in fact I’m wondering if the Mexican people invented orange! 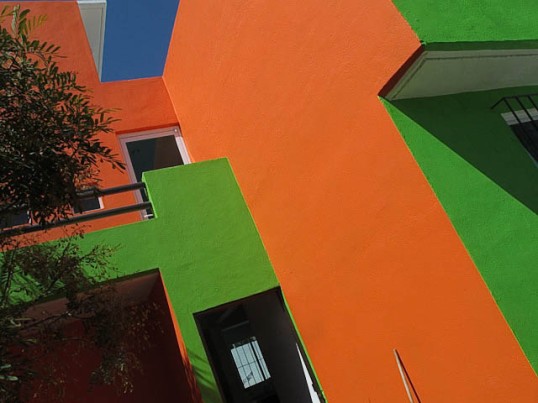 EAT and DRINK IT 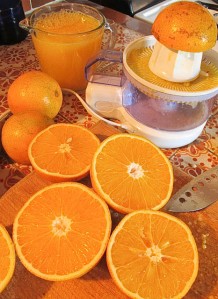 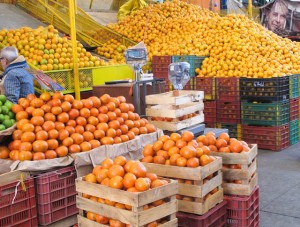 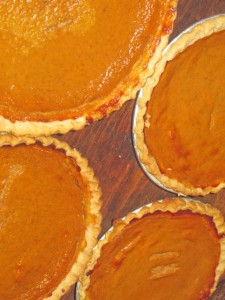 RIDE IN IT or ON IT 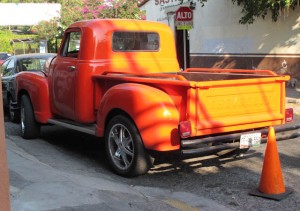 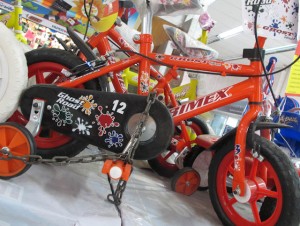 CREATE ART and DECORATION WITH IT 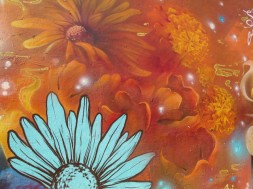 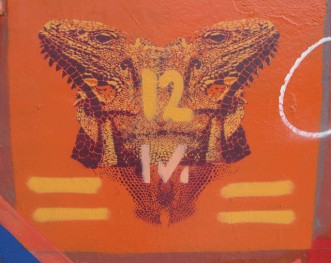 Part of a light show projected onto a church front during Day of the Dead celebrations.

Marigolds for Day of the Dead

OR JUST RELAX and ENJOY IT!

Sierra Norte near the village of Benito Juárez 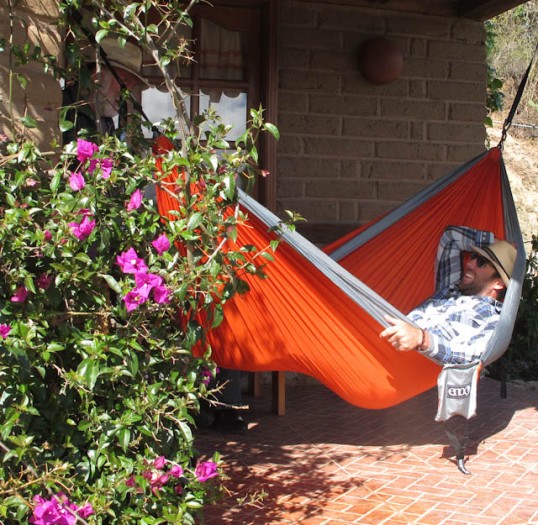 The World Has So Much to Offer…

And in this corner of the world is Oaxaca!

Life in Oaxaca is rich with 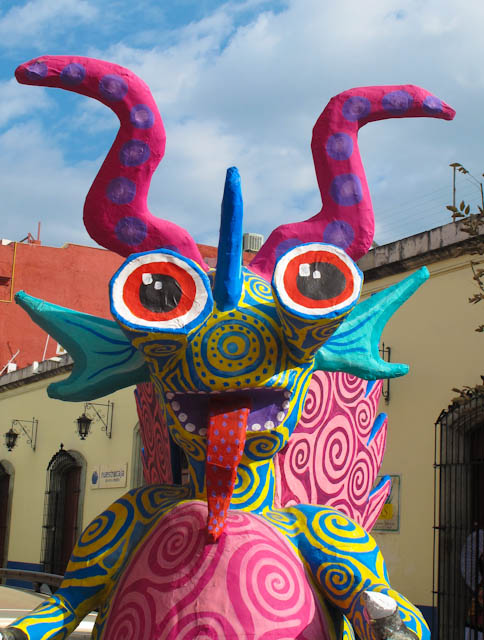 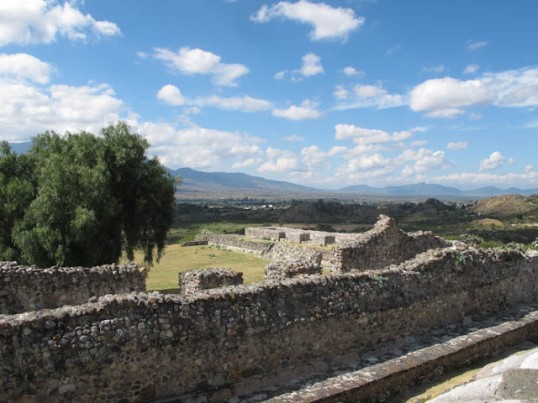 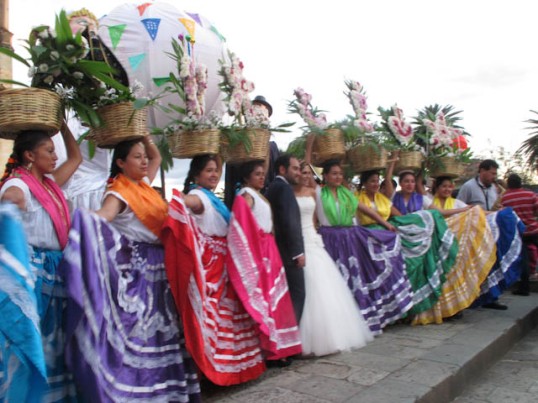 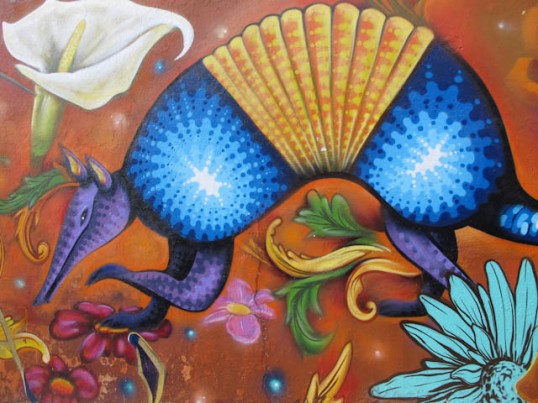 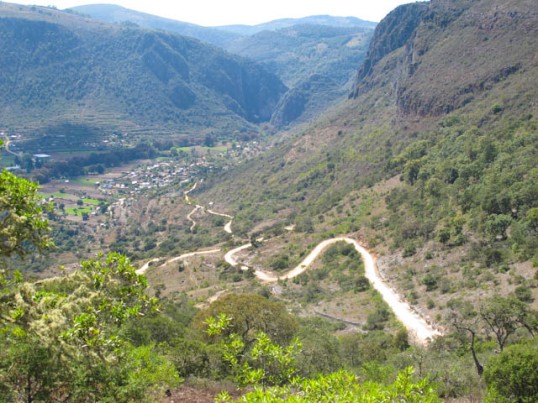 I hope  readers will learn from and smile at my photographic stories!

“FRESH” is all about FOOD and/or AIR 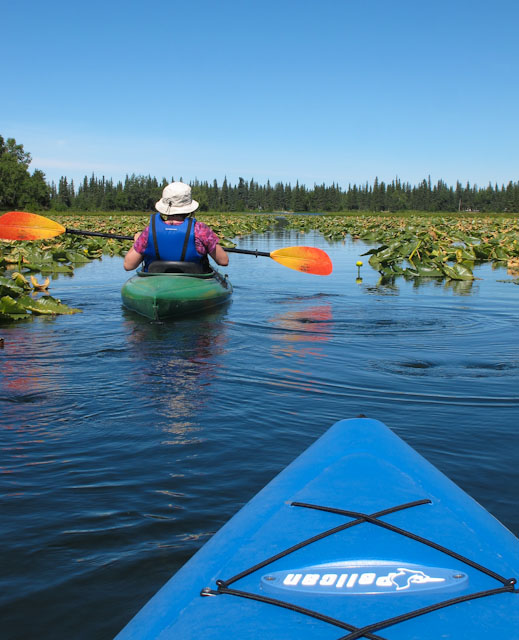 Chocolate…the very word evokes images of luxury and sinful decadence once saved for royalty alone…thankfully, times have changed and we can all be royalty!

Chocolate comes from the beans of the cacao tree that grows in tropical climates. The scientific name is theobroma cacao, which comes from Greek and means food of the gods. The word cacao refers to the tree and its products before processing. cocoa describes the product after processing, while chocolate refers to any manufactured cacao product.

Cacao was cultivated for the first time in the north of South America and arrived in Mesoamerica very early, even before the time of the Olmecs (1500 BC). Archaeologists have found evidence of cacao use on the coasts of Chiapas (1900 BC) and Veracruz (1750 BC). Around 600 BC, the Maya were producing a drink that was later used by Aztec nobles and warriors. As if we needed another excuse to eat chocolate, they considered it to be a restorative, mood enhancing cure-all! The elite Mixteca consumed cacao on festive occasions and presented it as offerings to the gods. 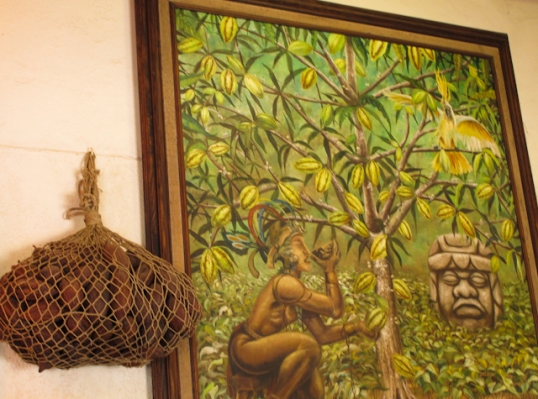 No one knows for sure the origin of the word chocolate. The word cacao has been traced to the Olmec. Around 1550-60, Spaniards that had invaded Mexico began to include chocolate in their diet. They began to use the word chocolate, and it’s believed this word is a derivation of xocolatl, meaning “bitter water”, from the Náhuatl language.

By 1600 chocolate was being shipped to Spain, and from there it spread to become a world favorite. The word chocolate is virtually the same word in all languages.

The history of Oaxaca chocolate goes back for centuries, and chocolate is widely used in Oaxacan culinary treats. Oaxacans consume much more chocolate than any other people in Mexico!

Most of the cacao beans come from the states of Chiapas and Tabasco, but even though Oaxaca doesn’t grow much cacao, it is the center of chocolate production in Mexico.  The indigenous people of Oaxaca have conserved and developed many drinks based on the ancient principles of the Mesoamerican kitchen, and there are at least eleven distinct preparations in the Oaxaca region. The base liquid can be either milk or water, with other possible ingredients being wheat, cinnamon, rice, corn, achiote, cacao flower, sugar, vanilla, almonds, and other ingredients known only in these regions. Two examples are champurrado,  a hot chocolate thickened with cornstarch, and tejate, a refreshing cold  drink made with chocolate, masa, flowers, and the pulp of the mamey fruit.

Beans Toasted and Ready for Milling

After the pods are picked from the trees, the beans are removed, fermented, and then ground into a gritty paste that is seasoned with various ingredients, depending on its intended use.

Notice the upper left picture shows how the cacao pods sprout right from the tree trunk.

David and I attended the annual “Posada del Cacao”, an event organized by the Centro Académico y Cultural San Pablo and Chocolate Mayordomo (a major chocolate company)  so that visitors can try the 11 types of chocolate drinks. “The objective is to promote the rich ethnobotanical and culinary heritage that cacao represents among the villages of the state of Oaxaca.”

Traditional Oaxaca chocolate, often referred to as “Mexican Chocolate,” is often ground with sugar, cinnamon, and almonds and formed into bars used to prepare hot chocolate and other dishes. It is readily available in many grocery stores, usually in colorful octagonal boxes filled with thick wedges of chocolate which must be broken apart for use.

Oaxaca is also famous for its mole, a savory dish which sometimes includes chocolate. Mole is savory, not sweet, and may be strange for people who are accustomed to enjoying their chocolate as a dessert. Mole is a rich, piquant sauce which is delicious with a variety of foods. You can buy mole pre-mixed or create your own, using the ingredients that Oaxacans have used for centuries. 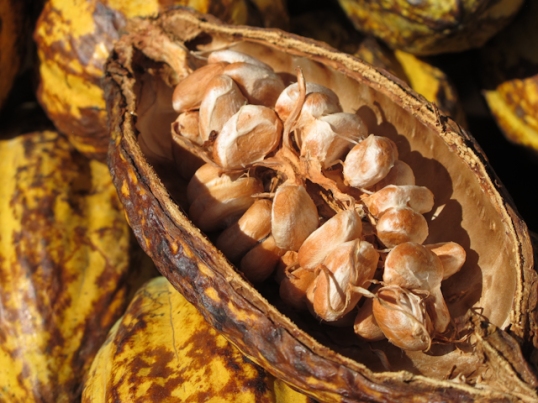 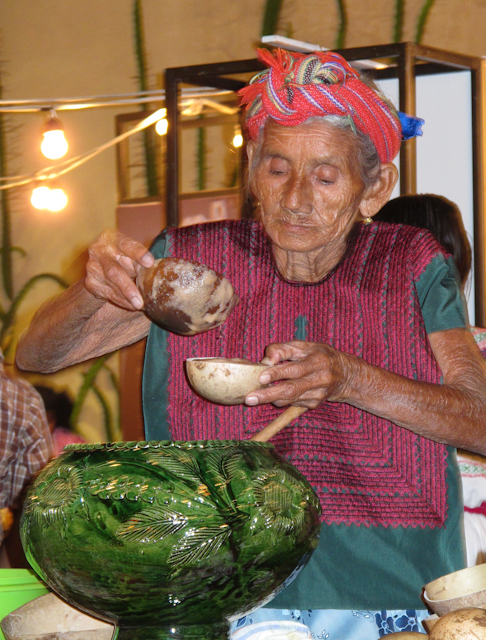 Chocolate Drink  Frothed and Ready to Eat  with Bread for Dunking!